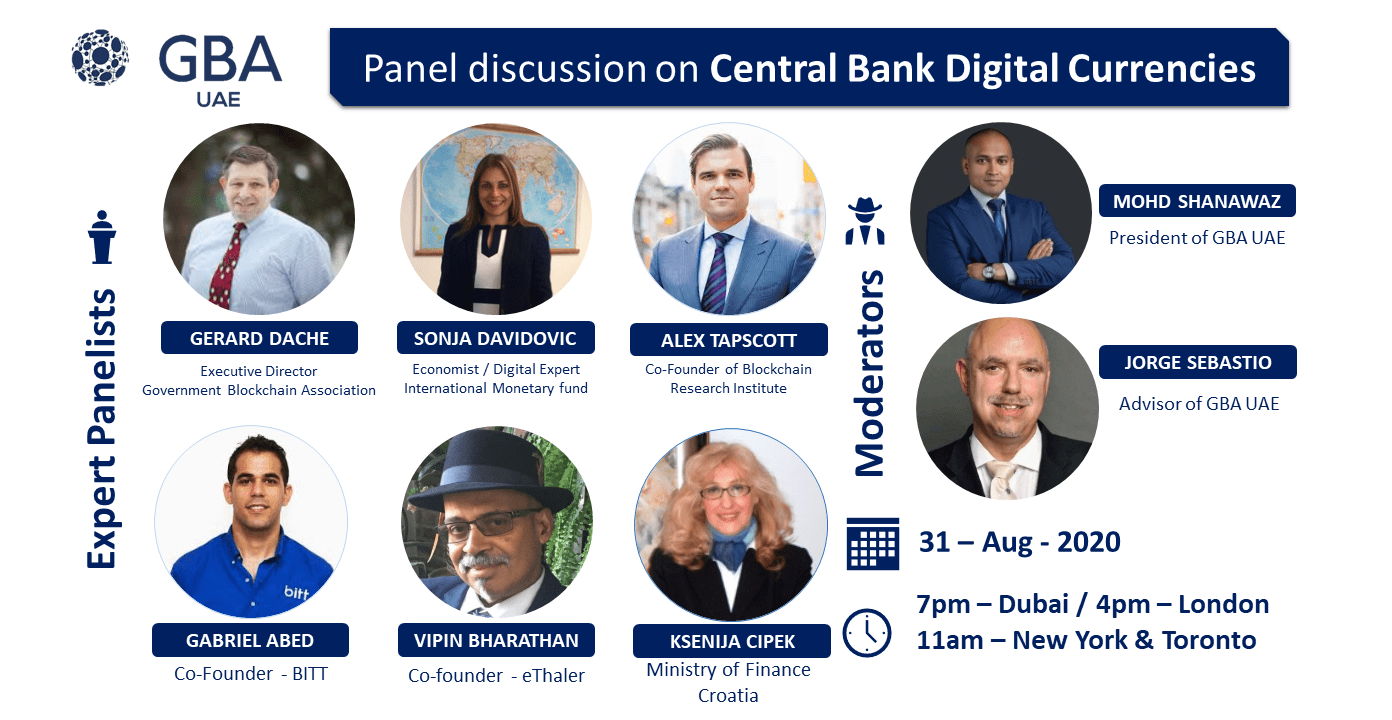 GBA is having a major event in Aug 31 on Central Bank Digital currency – CBDC. CBDC as a digital representation of a sovereign currency issued by and as a liability of a jurisdiction’s central bank or other monetary authority.

Central Bank Digital Currency (CBDC) has emerged as one of the most compelling blockchain use cases for the banking industry. According to the Bank of International Settlements, over 70% of central banks are actively exploring digital currency, and in light of declining cash use, emerging forms of privately-issued money, and the COVID-19 pandemic, many believe the shift toward digital payments for central banks is increasingly imminent as a solution to improve financial access.

In the panel talk we will explore :-

We will have a panel discussion with the following esteemed guests:-

Gerard Dache – is the President of Government Blockchain Association which he started in 2016 and has over 50 chapters around the world, sits in boards ‎of many start ups. He also runs famous podcast – The Future of Money, Governance and the Law and is passionate about implementing voting in blockchain and DAOs governing organisations.

Sonja Davidovic is an economist in the Offices of the Managing Director and a Digital Expert in the IT Department of International Monetary Fund, IMF where she has been for past 11 years. As Digital Expert, she is working on central bank digital currency implementation considerations. She is one of the co authors of paper “A Survey of Research on Retail Central Bank Digital Currency”. She is also founding Advisory Board members of the IMF Innovation Lab.

Alex Tapscott along with the famous Don Tapscott co-founded the Blockchain Research Institute (BRI), a global think-tank investigating blockchain strategies, opportunities and use-cases. Alex is the co author of best selling books – Blockchain Revolution and Financial Services Revolution. Alex has extensive governance experience and is an advisor to the International Monetary Fund, Elections Canada and the World Economic Forum.

Gabriel Abed is the CEO of Bitt, cofounded in 2014, whose current clients include the Central Banks of Barbados and the Eastern Caribbean Central Bank. Currently, Bitt is known for its application of mMoney, which is championed by Barbados’ Prime Minister Mia Amor Mottley and has seen widespread adoption across services in Barbados including large merchants such as The Sol group, ICBL (Insurance Corporation of Barbados Limited) and other 500+ merchants. He has spoken in leading conferences across the world.