“We must be free not because we claim freedom, but because we practice it.” – William Faulkner

What is the Internet?

Billions of people associate the internet with applications. WeChat, Facebook, Telegram, YouTube. These are all internet applications that essentially run many major facets of our lives.

All of these and any other global applications are based on services. Databases, storage, a content delivery network (CDN), you name it. Cloud providers like Amazon and other services like SaaS (software as a service) providers are all little more than centralized corporations where your privacy is tagged, bagged and sold. Thanks to evolution in technology, underlying services for global applications can be decentralized. Free TON flushes away old dogmas and revamps services to be fully decentralized. n

Sustainable decentralization is not simple

At the moment, building a reliable service on top of a network of decentralized nodes is not something that people get, but it is the way to go; however, such nodes need to have accountability in order to remain ethically beneficial. The way to do that is to create a network where it is only profitable to be ethical, that is, beneficial by default. That means rewards and penalties. A preprogrammed stick and carrot if you will. The trick is, this mechanism cannot have a central authority to hand out rewards or dole out the stick. This mechanism is called consensus. By consensus we are not referring to consensus as it relates to the blockchain as decentralized computation, but rather as it relates to all services at large.

Free TON nodes provide a variety of decentralized services that are operated and maintained through one modular sharded consensus.

Other ecosystems utilize layer 2, 3, etc. solutions that do not really work. Why?

In a truly scalable, massively decentralized network when there is not enough capacity to add more layers, the result is a sharp reduction of decentralization to a level that is unacceptable. Unacceptable to the point that it cannot even be called decentralized anymore. Ultimately it becomes pretty much unusable. To put it another way, layered solutions are a feeble attempt at sharding without the implementation of a proper sharding design.

The Internet was born free. Technical decisions were made by corporations that infected the Internet with their centralized DNA.

Free TON was born free from day one through decentralized governance in its DNA. Launched by many as part of a community effort, it became more and more decentralized every day ever since. From inception, the community has been committed toward stratifying its decentralization through what is coined stratified governance, including sub-governance groups with specific self-appointed tasks taken on by active members who then bring something to the network to make it better and grow. Each is a strata to produce results for the entirety of the community on the basis of a give-and-take meritocracy where results are the give and token rewards are the take.

All decisions are made through proposals and contests that are voted upon by community members. The obstacle here is that it is human nature to only vote when the subject at hand is something of personal interest to the voter. To tackle this obstacle, Free TON has implemented Soft Majority Voting (SMV). SMV makes it possible to account for lack of enthusiasm by those who may not necessarily need to vote when the circumstances do not directly affect them.

A model such as this can live indefinitely on its own — forever.

The economics are on our side

People doubt that decentralized services can substitute existing centralized ones due to additional IT expenses required for something like that. Really? Imagine going back to the 1980s. People would not have believed that they could one day have a personalized television viewing experience like YouTube. And yet here we are.

Hardware costs always decrease as technology advances while the benefits of a decentralized architecture would only increase and add value over time.

Being efficiently interconnected in a completely secure environment is every businessperson’s dream come true. Imagine logistics, customs, last-mile couriers, payments, what have you and then some, and all of it available through one point. No need to think about it. Click-and-do. This is composability for applications.

From a user perspective, forget about logging in… to anything! Zero friction. Zero pain. Zero concern about privacy or trust. That’s the user-centric model.

Allow global applications to deliver the same level of experience as you have right now in a centralized system, minus the centralized system. No compromises. No latency. Current blockchain users are accustomed to having both.

Here’s the thing. No community-centric applications can be built “on top of” existing, centralized backends if we want them to feel safe and warm under the blanket of trust, security and privacy. In other words there is no way to take things like, for example, decentralized governance, voting, reputation, DeFi, immutable store of value, money transfers, what have you, and move them to a centralized backend technology.

All existing global applications in use today can be built on a decentralized backend. Yup!

The fact is apps can be created on different systems. The question is, given the choices above, which system would you choose?

The original TON Platform with TON Storage, TON Proxy, TON Services and TON DNS was developed by Dr. Nikolai Durov to address the same problems described above. Unfortunately, Telegram was forced to end their journey toward this goal quite literally because centralized authorities have way too much power over the internet.

Free TON added a lot to the TON platform in order to move it forward to become the very first sustainable network for a truly decentralized internet. When the announcement came that Telegram would end its endeavor, Pavel Durov, the CEO of Telegram, stated the following:

I want to conclude this post by wishing luck to all those striving for decentralization, balance and equality in the world. You are fighting the right battle. This battle may well be the most important battle of our generation. We hope that you succeed where we have failed. 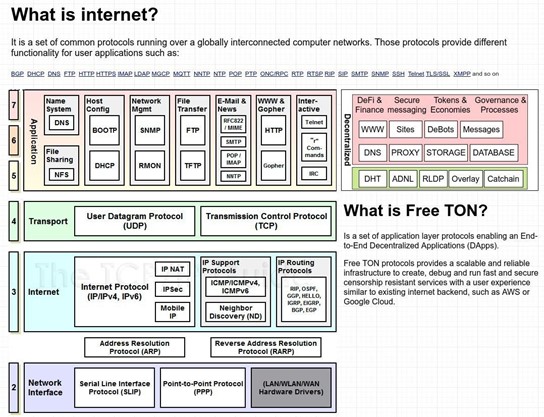 “Born free, as free as the wind blows, As free as the grass grows, Born free to follow your heart.”
Matt Monro

There are lots of reasons a developer needs Free TON as a platform for their decentralized application(s). It can scale to millions of transactions per second. It has a powerful new virtual machine for securely running smart contract code. You can write smart contracts in high-level programming languages like C++ and Solidity (with Rust coming soon). In short, it’s fast, versatile and secure. It is state-of-the-art. Of course networks like Ava, Polkadot, Near, Zilliqa, Solana, Ethereum 2.0, etc. also aim to be fast, versatile and secure.

So what makes Free TON unique?

Here are the top 3 reasons why developers should join the Free TON movement.

After the ICO wave of 2017 resulted in regulatory backlash, the industry settled on SAFTs and other forms of private agreements where access to blockchain investments was limited to accredited investors. As a result, we now have a wave of network launches where VCs control the vast majority of tokens. These networks provided generous allocations to teams, advisors, partners etc., while very few tokens ended up in the hands of the community. In the VC Chain model, users and developers are expected to buy tokens to use the network. As VCs hold these tokens, waiting for them to appreciate, the price users will need to pay is likely to increase.

Free TON has 93% of the total supply reserved to build a community. We believe tokens are a tool meant to build just that. They allow all participants to have skin in the game. Having tokens to distribute to the community is a “growth superpower” not available to VC chains. It also allows the TON community to provide early support to promising new apps, giving developers the tokens they need to bootstrap their projects.

Grants are deeply flawed. A recent post by Lane Rettig from the Ethereum community said it best: “Grants are ‘permissioned innovation’, where the leaders of a community appoint the chosen ones. Sometimes these processes lack transparency or can be perceived to be unfair.” Rettig goes on to make several concrete suggestions. It’s a great read so please check it out.

We believe the solution to funding community efforts involves moving faster, distributing tokens wider, involving the community, making everything highly transparent and working to create excitement in the community.

Contests are the great leveller. They remove bias from the process. Everyone can compete on merit, independent of where they live, what their background is or who they know. It is a great way to welcome new people into the community while creating excitement for everyone involved. And we can record everything on chain. We can vote for contest suggestions, vote for contest judges, vote for contest winners, and so on. We can take token distribution transparency to a new level.

Yes, the term decentralized is so overused. Some might say that it is a word that has lost all meaning. So we are here to reclaim it.

There are only a few networks that are truly decentralized. Ethereum and Bitcoin obviously. More recently Cosmos has moved to the next level of decentralization. We have also seen previous generations of blockchain technology being forked by communities. Ethereum Classic is the obvious one. There were also several Eos forks. But this is the first time that a state-of-the-art blockchain has been born decentralized. The decentralized nature of Free TON is important for developers who want to build dapps that are resistant to censorship.

Free TON is also a blank canvas for anyone who is interested in decentralized governance. The only governance it has right now is the loose governance of the groups of validators, developers and users that have launched it. Anyone who feels they can contribute to governance will be welcomed to the community. We can design the best governance mechanisms and build the best tools. By optimizing governance, we can innovate much faster.

We also need people with ideas for marketing, go-to-market strategy, core network features, and others. Free TON is an exciting place to be. A place where you can help shape the future of the first truly decentralized, cutting-edge blockchain that exists today.

Far much more than a voting or DAO…