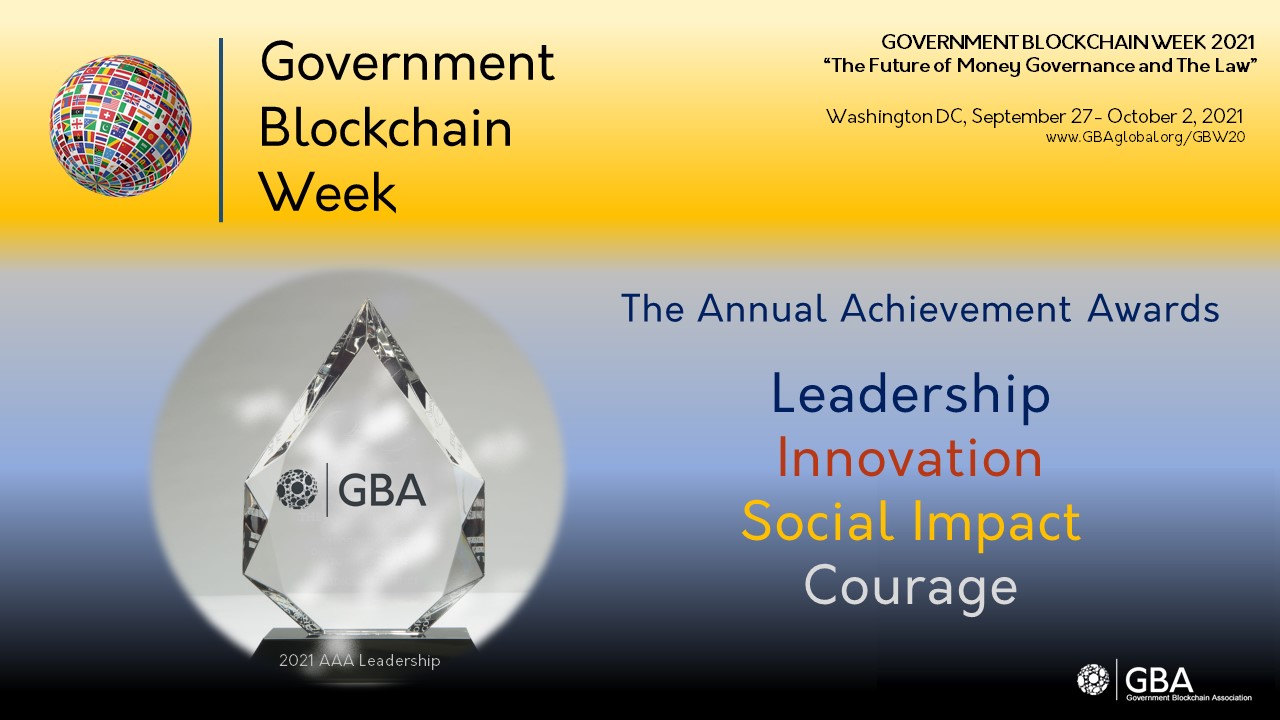 Due to the rising COVID cases from the Delta variant, Government Blockchain Week and the Annual Achievement Awards have been postponed until the spring of 2022.

In April 2019, during the Guatemalan election, the people of Guatemala suspected that voting fraud had occurred. Since additional elections were scheduled for August 2019, citizens wanted assurance that there would be no fraud in the next election. That was the impetus for Fiscal Digital, a Guatemalan citizen volunteer organization, to utilize a public immutable blockchain for their elections. Against overwhelming opposition, the Organizer of Fiscal Digital, Carlos Toriello Herrerias, was successful in implementing a blockchain-based voting solution in Guatemala. Carlos was the winner of last year’s GBA Annual Achievement Award for Courage.

The Government Blockchain Association (GBA) is pleased to announce that the 2021 Annual Achievement Awards will be happening live in Washington DC, (9/30/2021) as part of Government Blockchain Week. Four awards will be presented in the areas of Leadership, Innovation, Social Impact, and Courage. Nominations of individuals deploying exceptional blockchain use will come from around the globe. From securing land titling records to self-sovereign medical records, to immutable and verifiable voting, blockchain is affecting every industry that transfers value. The winners of these awards are truly making a mark in history, and there is still time to nominate your colleague.

Winners will be awarded by MC Robert Levin of Emergingstar Capital, from a stage in Washington DC in front of a distinguished audience. Receiving a GBA Annual Achievement Award is a credential that can be listed on Linked In, resume’, and any other social media as a recognized global achievement. Do not miss this opportunity to promote the exceptional achievers in your circle. Nominate them for the GBA Annual Achievement Awards today.

Annual Achievement Awards nominations are open until August 15. Winners will be announced from stage in Washington DC on September 30th. All uses of blockchain technology are eligible.